I decided it was time to wrap gifts. I had all ready done the monster portion with the wrapping of Tiny E's gifts so it would have appeared that I wouldn't have that much more to do.

Appearances can be deceiving.

First were the gifts to the people at work. I had planned ahead and had little gift bags at the ready to hold my little gifts. This took longer than I had expected because I also had to take care of cards at the same time. I still have to take care of a few other people in the building but the gift wrapping portion of the evening for people at work was over. Yay.

Feeling pretty awesome after getting though that group, I decided that I would wrap the gifts of a family member. I hate wrapping. Really. I hate it. I'm not very good at it and it takes a great deal of effort to make a package I've wrapped look attractive like the fake gifts wrapped under the trees in the displays at the mall . It's hard to make a package I've wrapped look likeit was wrapped like an adult or someone with arms.  To be honest, it' s hard just to cover up the package, it's not going to be attractive. One year I found a charity that was wrapping gifts and that year everyone knew I had let someone else wrap the gifts for me. My packages looked like they were wrapped by someone with two usable arms and some muscle control.

This year I didn't have that luxury.

My plan was that I would wrap Family Member #1 gifts and then I would do something else, like pay attention to my pets or watch TV. After pet attention and TV, I would wrap my Giftee's gifts and and then tackle Family Member #2 gifts the next night and go on from there with Family Member 3, 4 and etcetera. It would be time consuming and drag the whole process out but I also wouldn't be as likely to end up in a rocking back and forth under the dining room table trying to treat my countless paper cuts with adhesive gift tags.  Happily, it didn't end that badly! I got Giftee and  FM#1 taken care of and then moved on to FM#2.

I had my fab new bows and rolls of tape and paper and I was on a role.

I went out and bought special new paper so that I wouldn't have to face my last years paper which was also the year befores paper and some of it dated prior to even that. I had begun to hate my Christmas paper and blame it for not just going out and taking the initiative and wrapping the gifts on their own. What were they waiting for my permission? They weren't new here, they had a good idea how to accomplish the task. Lazy. I also think that giving human qualities to wrapping paper  is wrong. No gift paper is so necessary to the plot that it has to be saved year after year. No gift paper is so cute that it should be bought in 300 foot rolls either. Think Ahead! Is the Peanuts and Pooh papers going to still make me smile next year? Most likely but maybe not. Maybe I should have bought them in smaller rolls, maybe next year it will be all about fairies and  pirates. The market in wrapping paper futures must be a very volatile one.

When I was wrapping Tiny E's gifts days ago, my project was to wrap each gift in a different paper. I liked this, I mean, I would also like to wrap everything in the same paper and have some sort of decorating scheme when it comes to wrapping but I never do. I think it would be kind of Martha Stewart to have all the packages under the tree be in the same color pallet, I associate that kind of thought as being very grown up. If  were a grown up I would not have ended up with Pooh Bear and Peanuts paper.

Speaking of new paper and color schemes. I bought new bows as part of my plan to make gift wrapping an enjoyable experience. I bought the paper at Wallyworld and the bows at Poverty Barn. Big Mistake! The paper was  New for 2008 and the bows corresponded to the "old" colors of 2007, that is the only way to explain why my bows were lime green or turquoise or brown and my paper was a slightly less saturated lime and not-at-all-turquoise with only a hint of brown. Who decided that lime green and turquoise and brown were Christmas colors? And even worse, because I bought my paper at Wallyworld the colors are more Red/White/Blue than Red/White/Green. I mean, Snoopy and Pooh aren't carrying flags or killing terrists but both would be appropriate for sale at the PX. I hadn't noticed because I was blinded by the glare of of Charlie Browns bald head.

But. I got the gifts done. All of them. 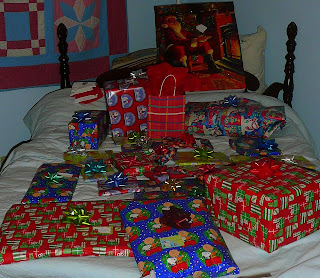 I think the real reason I put off wrapping, is that once the gifts are wrapped it means to me that everything is over.  All the effort and energy and time devoted to Christmas is almost over. It's also about the passing of time and getting older and everything too. I haven't been as good at doing my Advent calender on a daily basis either because I'm not happy with how fast time is moving.
Posted by Unknown at 7:06 AM