"It means more if you do it yourself" And Other Lies they Tell Us.

I went to Lowes at lunch and (thought) I stocked up on everything I would need to get my door taken care of. I got the stripper - not the one I found online, still looking for that, safety goggles and respirator mask and steel wool sponges.

I realized later i didn't have gloves or el cheapo paint brush. Later on I found I didn't have any odorless mineral oil in the house either. Trip #3.

I get home with all my new toys. I break out the mask and gloves and goggles 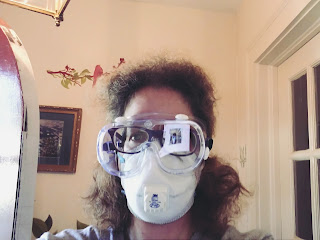 And then I went to open the chemical. It wouldn't open. Not an inch, I could not get the lid to open. It had some sort of child proof bull shit cap on it and it was not following instructions. I went online and found that if I took off the plastic cap, the can could be opened.

I couldn't get it open.

I called gtech support. TS told me that due to changes in rules in the south, they had to change the amount of torque they use on the can lids and that they can be very hard to open. That is putting it mildly! Walnuts are hard to open! Platic packaging is hard to open! They both OPEN.

He said he was a big guy and he couldn't get the cans open. He suggested some sort of wrench, I told him I  already used a crescent wrench and I couldn't make it work, he said that was the wrong kind and suggested a spugergumble wrench. I do not know what a spufergumble wrench is! It turns out its like an adjustable wrench only the mouth hangs open further - and I had one!

The last thing he said to me before I told him it was very bad customer service to have a product that the consumer can not open - on damn purpose no less! - He told me to go get a neighbor and have Him open it for me.I told him I was returning his product and buying one better designed and he better know this was a customer service complaint about their damn product.

I got my wrench and opened the can and went to work. 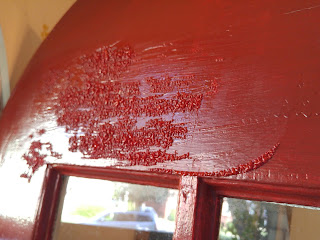 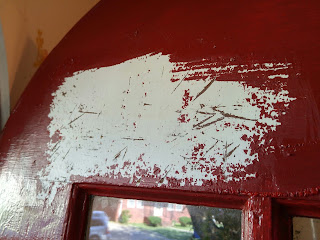 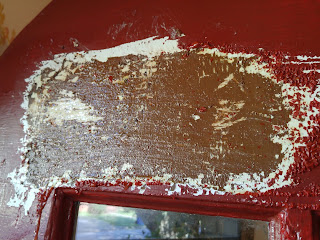 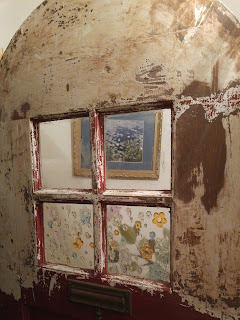 And lots of rubbing and scrubbing! Its thick like syrup and you brush it on and it just a couple of minutes the paint begins to bubble - you can hear the chemicals ripping and tearing at the paint - its fabulous! See image 1.

.I think it would be the most effective on newish generations of paint to get the  whole  removing layers and layers of paint effect. My paint is mostly very old and to my shock, there aren't thousands of layers of paint on the door. There seem to be only three layers of paint. My red paint, the brown that was there when I bought it and a layer of white they may or may not be primer and I can't remove it.

I'm going to do what I can with the rest of the door and then surrender to my brothers electric sander to get the rest of it off and get it nice and smooth for painting. The goggles, mask and gloves were useful but hot and in the way. I wore the gloves and they were great and I tried to wear the mask but I couldn't breath with it on. The goggles were only vaguely useful.