When my parents blew through town earlier, the wind was not strong enough to carry Mini Kitty with it.

Mini Kitty has been a joy an absolute joy - if you define joy with it's little known "hiding under the bed all the time" variant. It's not used much, it's fallen out of favor but it is still listed in the older versions of some dictionaries I know. You wouldn't know them, they live in Canada.

Dogger is feeling much better. She was feeling so much better that she had the strength to go ballistic when the neighbors came home at 4am. I heard her barking and my first thought was Damn. Here we go again !@#$. I went downstairs with a heavy heart. I walked in the room and saw her with her paws on the window sill standing about 5 feet tall barking her head off and looking like an avenging angel. If I were a bad guy experimenting with windows and came across her looking like that? I'd go find another window in another house. She was really fierce. I told her to leave the neighbors alone, but I gave her a cookie anyway for A)guarding the house and B) not throwing up blood.

The Kitty has been under whelmed by Mini Kitty. it's not to say he's not happy about her being here, he has been thrilled by her food dish and I know he's just crazy about her box - he hasn't actually spent much time with her. His mistake seems to be his failure to spend enough time hiding under the refrigerator.

Last night was the first time Mini and I had any "us" time. I went upstairs and she was sitting on the tree sharpening her claws with a wet stone. I could see where she had discarded a razor whip. Mini was ready to rumble.

Me - Hi itty bitty kitty! How is Boo Kitty? 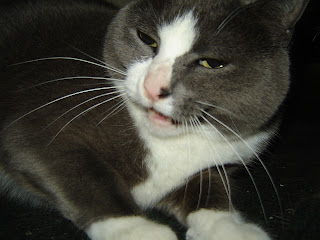 Me - Is baby waby cwanky?

Mini Kitty - I will mess you up. 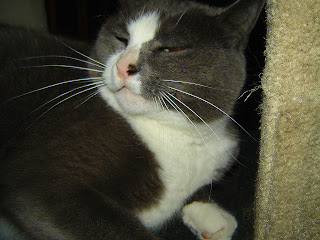 Me - Does baby want to play?

Mini Kitty - I will cut a bitch. 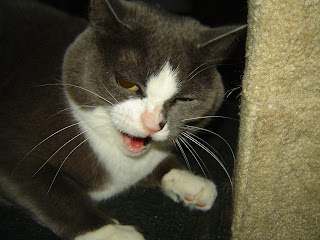 Me - She's such a cwute little baby!

Mini Kitty - Are you high? 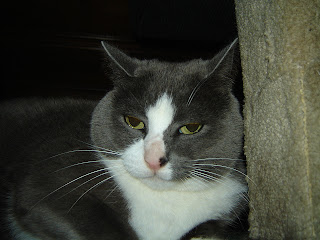 Mini Kitty - Oh no you didn't! 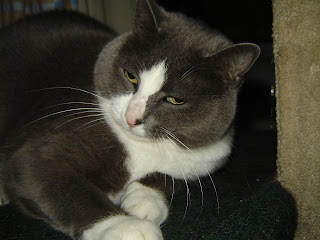 After that the discourse really went down hill. Kitty goes home on Saturday. He's keeping track of the time by carving little X's on my fingers. And arms. And face. And corneas.
Posted by Unknown at 7:06 AM