I had a huge list of things to get done over the weekend and shhh don't tell anyone, I got them all done! I mentally made out my to-do list Friday night
And said, Yeah. Right.

I knew there were some things I really needed to get done sooner rather than later, my outside lights for example was a job I wanted to get done  before Christmas. True, I put up significantly fewer strings up but I did haul out the Tomato Brace Tree and I had said I wasn't going to pull it out this year. it won the display lottery because it has LCD lights on it and I decided it wasn't going to cost as much to run  as some of my many non-LCD strings. I was afraid the front of the house was going to look bare but with two trees inside, a spot on the door, the air-blown in the yard and the Tomato Brace Tree, I think it looks pretty full. 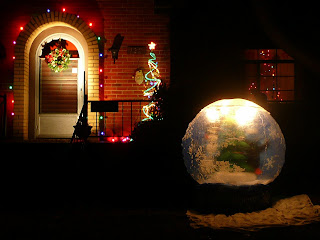 Lets see, before I could decorate the front of the house I had to blow the yard again. It was funnish, but I still can't believe that someone stole my rake, it just really pisses me off! Who would steal a rake? It's not like the street value of a rake is worth the stress of me screaming bloody murder and setting my dawg on you if I were to catch you doing it. I really do not think there is enough copper in a rake to make it worth stealing one right now, I don't think copper is actually worth stealing in it's purest form. Things suck all over, even for thieves. But anyway, yard blown, decorations pulled for attic, extension cords pulled from corners and inside the deep holes where they hide.

But even before I could work on the yard Sunday, I had more pressing business to attended to : Dogger needed to see Santa. Again. I took her Saturday to Petco and had her picture taken but it was really lousy. They tried real hard but it was just not a good picture. The scenery was on the wrong side of the lame set and most of the picture was of the adopt-a-cat crates and boxes of kitty litter, and Dogger wouldn't smile, she did rawk her green velvet jingle bell collar though. 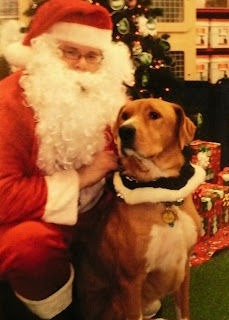 a picture of the picture.
She did do really well in a strange place  and a new situation and  lots of people and lots of other dogs  I worry about her since the Addison's as stress is very bad for her and new situations and other dogs are very stressful. It was a good trip though and many people told her she beautiful, she and I both like to hear that. Later on Saturday Alphagal and I went shopping and I was able to pick up some new cookbooks for my Giftee and I got a skirt, later Dogger and I went to the gas station and passer by gave Dogger a bad vibe. She didn't take her eyes off  him until her was out of sight. There is a big difference between Dogger paying warm and fuzzy attention to you and how cold her undivided attention is. I bet Mr. Passer-bys' skin was crawling and he didn't know why.
Sunday I went to Petsmart for yet another Santa picture. Dogger was again the belle of the ball and everyone loved her. She had a great time too. She is going to be impossible to live with now, every-time I take her somewhere in the car she is going to be expecting to get treated like a princess and plied with cookies. 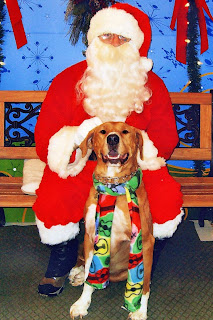 And? I started on dog cookies! Alphagal loaned me her incredibly awesome mixer and so far I have two batches in the dough stage. Yay! Two down and two or so to go.
Posted by Unknown at 7:06 AM