I was walking the fence-line after dinner and I noticed that the weed barrier was not the flat expanse of , well, weed barrier that I remembered. My barrier had developed "growths", swellings, weed barrier pimples!

I went to investigate and instead of smart ass brawny weeds to destroy, I found struggling little volunteers! I've never had volunteers before. I pull everything out and till three or four times over the season and  then cover it with weed barrier  and this usually this does a good job in eradicating any leftovers from season to season. Well. This year my birth control failed.

The first one I found I couldn't figure out what it was, it wasn't located in an area where I had planted anything last year and my thought was that maybe it was an errant bean - which would have been fine, I was going to give it its own tomato cage and let it do its thing. Its not a bean, its a potato! When my first round of spuds froze to death, I pulled them out of the bins and gave them to the puppy to play with. A couple ended up in the garden but I knew I was going to till the hell out of it, that there wasn't much chance of anything especially frozen to death potatoes, germinating. 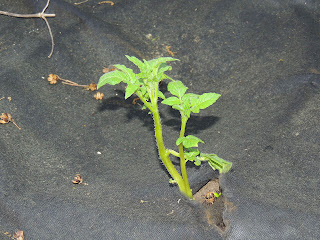 The others may be spuds, but I don't think so, the leaves look different and I'm thinking they are some kind of flower, although the only flowers I ever planted in that bed are marigolds and they don't look like marigolds. They could be Borage 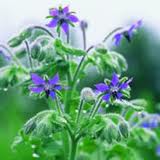 Which I did plant but in another part of the garden, but I do know that they are aggressive little self seeders, so maybe but looking at the pictures I found online, I don't think so. I also can't speak to very young borage since what I planted was about half grown when I put it in the ground last season. A ground covered by self seeding thwarting weed barrier. 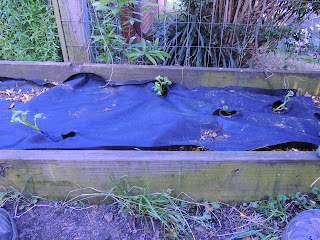 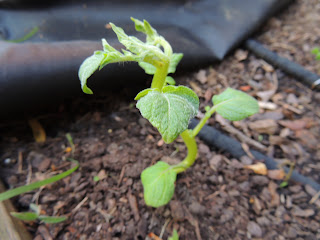 They could be peppers, as that is what has grown in that bed for years, but I don't think so, pepper leaves are different. Its a mystery. Whatever they are, they are safely tucked in now and will most likely be the only things in that bed. Its never been a very productive bed for me and I wasn't planning on using it this season anyway. Apparently, the garden had other ideas.

Something I found a could identify was a morning glory vine. I had wanted to plant some in a different part of the yard and now I am one up on my morning glory planting. I'm still going to plant more, but this is a neat way to start. I'm not positive that it is going to enjoy being transplanted but morning glories re nothing if not hardy. 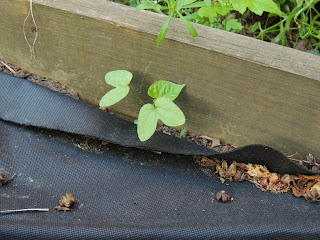 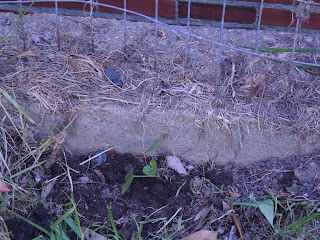 I also checked in with the tomatoes, they look good. A little smaller than I would like, but they have all ready grown and are standing much more upright than they were at first. 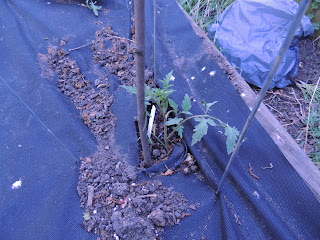 I would really love to get the rest of the veggies planted this weekend before they think the entry way is going to be it for them. I'd feel bad if that was what they thought I bought them home just to make them live like that. Poor plants! I want them to know that I am usually a very good urban farmer and i would never expect them to live out their lives in my entry way! Not unless I saw a really compelling article about it, anyway. "DIY Green House! Put your unused Entry way to work for you!! I need to get them out of my entry way before I figure out a way to make it work.
Posted by Unknown at 7:00 AM