Okay, so Christmas Day was great, dog-wise, Rocket had a great time with Esme, who is finally getting a little bit larger and easier to play with and he is taking advantage of it. He and I both needed him to have a friend that I don't have to pay for.

But, let's talk about Christmas Eve. I went shopping for most of the day and left Rocket at home, he was fine with this. The problem came when I also left him when I went out for dinner, and again, left him at home - he was not fine with this. I came home after dinner and found this scene 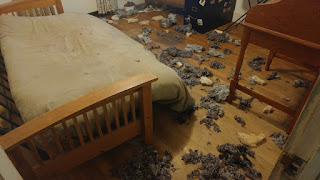 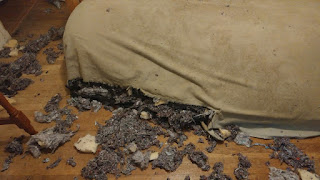 That tear goes through three layers of futon bags before it rips into actual futon. He also managed to take off his own collar and hide it so well it took me a good forty-five minutes to finally find it in the carnage. I was afraid he had accidentally eaten it and I was going to have to take him to he emergency vet at nine at night on Christmas Eve to to have it surgically removed . Merry Frickin Christmas.

Fortunately, for Christmas, it had just shaken it loose in his frenzy and it had slide under the curtain and was hidden. I couldn't do anything about all this at the time because I had to get changed for Mass, I did this and took him with me to hang out in the car and maybe get some vibes from the various churches along the street.

This is what it looked like by the time I went to bed Christmas Eve. 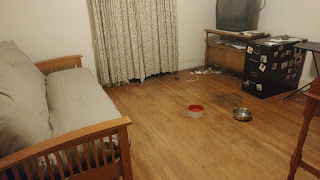 I  (with Rocket in the car) spent the day after Christmas going from one Walmart to another and then from Target to Target searching for a budget futon cover to replace my ruined one and  struck out. Wally does indeed carry the product in the stores but was universally out, Target doesn't carry the product in the stores officially ( the web site says they do) but does officially online. I could order it but I don't want to wait for delivery, I need it NOW.

I can't trust the dog with a ripped up futon, once he knows its weakness he will continue to attack because he is predator - its what he does. Find the weakness and hit it, over and over and over again until you kill it. He already wounded it , he will want to kill it .I need to get the smell of blood out of the water before he goes back into the pool.

After it became clear that a replacement futon cover wasn't going to fall from the sky, I added several layers of bandage to zipper section he attacked, its covered up now and harder for him to access. Hopefully.

And, yes, he has done this before, prior to being medicated. This time he was medicated, but he may have been over medicated by me and that may have caused the frenzy. Ta Da.)